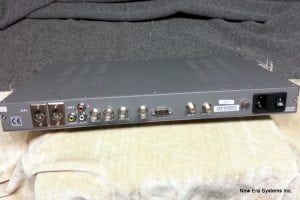 The TDR3000 is DVB and MPEG-2 compliant and equipped with a QPSK demodulator and an ASI input and output.

The 1RU, rack mountable, TDR3000 can be configured with up to two PCMCIA Common Interface modules allowing the unit to receive various encrypted DVB-S programs. These DVB-S programs include, but are not limited to, Conax, CryptoWorks, Irdeto, NDS, Mediaguard, SECA and Viaccess.