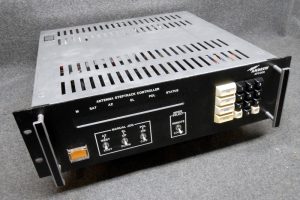 Why Use a Steptrack System?
The apparent stability of a geosynchronous satellite is defined by its “stationkeeping window”. This “window” represents the East-West (E-W) and North-South (N-S) travel limits that apply
to a satellite.

I really like the manufacturer’s use of the word “Excursion” so much more elegant than saying that their satellite is wandering around.

Datasheet for the ANDREW APC300